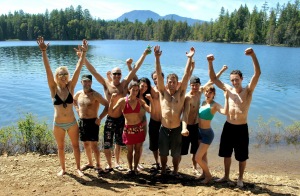 This crew = good times! Psyched to have had a long weekend of climbing and camping.

Holy cow. Time is flying by! I’m working and climbing (finally!) and getting psyched to head out to Europe. I did my best at Nationals and despite my placement, I was selected to compete in a few world cups starting in Chamonix and finishing in Kranj.

The recap from Nationals was disappointing. The highlights were that I had fun, I watched some amazing athletes compete, I witnessed two local “kids” make finals and Drew Ruana take 2nd by a narrow margin. Ashima was in true form and Margo and Brooke put on a great show. The routes were well set but for me the angles were a bit intimidating since I don’t have access to those types of walls near me. Still, my first route was good. I had a few hiccups where I pushed through but was unsure if I was going to pull it off, and unfortunately, rushed the upper headwall and flashed pumped off the route.

That highpoint was a good one but not good enough to offset my performance on the 2nd route. I was seeded first, which meant I climbed first for the initial qualifiers route, then I am middle of the pack for the 2nd qualifying route. That alone was enough to make me anxious, something for some reason I wasn’t able to control for the entire competition.

You can watch Route A, here.

The 2nd route was harder, in my opinion, than the first route. I had a lot of energy going into this route; like I said, I was anxious. Unfortunately, I struggled with a move low on the route, too low to make semis. I was very disappointed in that performance.

Ashima walking the first route. Women’s second route can be seen to her right.

I volunteered for the rest of the competition to take my mind off it and stay focused on learning something and having fun. It worked. I went home, double checked the results and buried my head in my pillow to sleep it off.

I was about to write off any hope of a world cup this year, but our team was lacking participants and opened up applications for a spot to compete. I wouldn’t be an official US Team member, but I didn’t care about that. I have wanted an opportunity to compete internationally for lead climbing since my first and only lead competition back in 2011 where I did represent the US National team and competed in the first World Cup in the US for sport climbing in 20 years! But, that year, despite having signed up for Spain to compete internationally, I would end up having shoulder surgery instead.

To have a chance to get this experience now, after 6 years of not competing? I am beyond excited! I put in my application and was granted a spot to compete in 3 world cups: Chamonix, Briancon and Kranj.

Back in my old stomping grounds,  Rude Boys goes down. Photo by Brett Johnston

With my Nationals training and my disappointment in my Nationals performance, I set my training regiment a bit differently for these comps. First, I knew my head needed to catch up to my ability and my ability needed to get to the stage I wanted. So, I continued my training to finish it out and then tabled it as I set my sights on climbing outdoors as much as possible. The combination has been great for my confidence and my overall psyche for climbing.

I know that these first 2 comps are about experience. There are going to be many unknowns and variables and having a chance to go through the process will give me more insight into how to improve and where to focus for the next one. I have no goals right now. Just show up, have fun and do my best! This is the only time I can have this mindset because after you get some experience and know what you are in for, then you also know what you are capable of and therefore have more ambitious expectations. 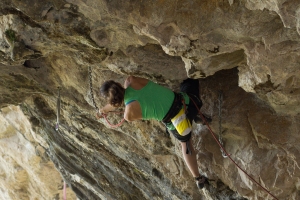 No matter the outcome, I know I will have a blast because I’ve never competed on an international stage for sport climbing outside of the US and it’s Southern France! I’ll be experiencing Ceuse and all the fine things France has to offer. And, I have a friend coming to cheer me on and share part of the experience. I can’t wait to reunite with friends and take some time to climb freely while there. It’s less than a week before I leave. I can’t believe it’s time to go already!!

After 1 year of waiting on a split ankle tendon to heal and 1 year of rehabilitation, I’m finally back! In this short time I’ve come back into climbing, I’ve had a pretty good run of ticking climbs I have wanted to climb for 10 years! A brief look:

March 12, right after Nationals, I flash 5.13a at Golden Cliffs/East Quarry just outside Denver, Colorado.

April 15, I onsight Kings of Raps (5.12d) at Smith Rocks, a route I have wanted to do since I heard my friend, Mandoline, had done it 10 years ago.

April 28, I send Darkness at Noon (5.13a), 3rd go. This was a route I remember hearing my friend Kim had done years ago and one I had thought “wow, if I could ever do that….”

April 30, Another climb on my ticklist: Rude Boys (5.13c). I snag this thing within 3 tries, making up the crux as I went because I did not have it rehearsed nor had I linked through the entire thing when I did it.

June 28, I send Moment of Silence (5.13c) and fall at the redpoint crux on Jesus Save the Pushers (5.13a)…wished I had beta for the top! I didn’t see where to go and was too tired to think straight so blew the 2nd go.

July 2, I send Baby on Board. Again, unrehearsed beta, changed mid-climb but I pull it off and get the send. Psyched to end this mini-project there. That place gets over crowded.

I’m excited for how the season is shaping. I’m ready to experience the challenges in Europe and aiming to meet some long standing goal of mine, in addition to competing in Europe.  I am eager to see what I can do from here and am doing everything I can to stay injury free and keep the psyche up.

There is only one thing I know, when it stops being fun, walk away and do something different. There’s no walking away for me just now. Just upward and forward climbing progression. I’ll post the link to the comps when I have them. Meanwhile, celebrate these little successes with me and send me good vibes for Europe. And, if you are out and about, hit me up and maybe we can climb!

As always, stay safe out there.

Disclaimer: WordPress may include ads, which I do not endorse, to various blogs following posts.